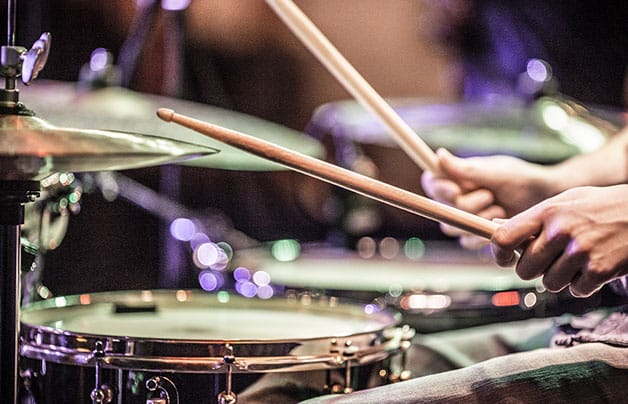 Drumming is all about patterns. That’s what we drummers do. We need to know our patterns.

Drumming is learning and repeating separate patterns for each limb then combining these patterns to create rhythms in time. Each rhythm has its own patterns. Practice downloads these patterns into muscle / body memory to be recalled at will.

I have played drums “left handed” for 40 years and a year and a half ago I decided to learn to play “right handed” as a challenge to my brain and body. This would avoid those awkward jam session moments when the right handed drummer lets you use his kit and you have to change his whole kit around. Also my left hip was aching from lots of effort on the bass drum.

It has been a seriously mind bending, at times frustrating and ultimately rewarding exercise. Patterns that were so ingrained had to be consciously rewired to a mirror image. (The right foot playing what the left foot used to and the right hand playing what the left hand used to). It was like learning to walk again after having been able to run. I felt and sounded like a beginner again as my left dominating side wanted to take over from my right. Little by little by consciously practicing I have been able to establish new right handed patterns (which sound the same but feel different) and have actually become more ambidexterous.

I found the REN XUE and especially the practice of Ren Yuan helped a lot in this unlearning / learning process. Ren Yuan is particularly good for balancing out left and right sides of the body. All those beautiful across the centre line flowing movements give me greater body awareness and balance. It makes me feel calmer and more relaxed and centred which is a great state to be in on the kit (or anywhere in life). I learned that to create a new pattern I needed to be in a good state first. If I was tense, tired or rushing then the results wouldn’t come. If the new pattern could be learned in a good state then it had a much better chance of being remembered and recalled.

Now when other “non drumming” patterns show up in my life (the ones I really need to work on!) I am more able to recognize them as patterns requiring work. I don’t bother trying to correct them until I am in a good state because then there is a better chance of successful change. Just like drumming.